From the hour i've played of this so far it is really interesting and cool! Characters are rad, and the whole reincarnation to gain skills and stats is pretty cool, especially after i went back to try Rxcovery.

Your games are extremely cool and i love your character designs. I can't wait to play more of this and whatever you end up making in the future!!

I hopped into this on a whim and loved it, really enjoy the art and music in this one. Good stuff, boss.

i found this after randomly scrolling through games and finding the bowser thing. the art style seemed neat so i checked out you account and now found this and wanna play it.

I'm tempted to speedrun this game. CarbonDemon's pentaslash can one oneshot most enemies (at least it did in normal mode). You could make a party full of carbdems, level them up to unlock pentaslash and then reincarnate them into weddingninjas. Tell me if you'd like to see me try. 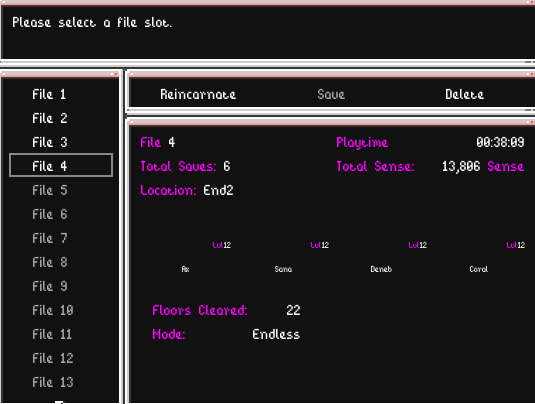 Here's my best time after a day of attempts. I wonder if anyone's ever finished it faster than this. Maybe I've just established the world record for Dys any%.

3. battled everything on floor one

4. missed an enemy, tried turning around

but in all seriousness, cool concept for an rpg maker game. Didn't know 3D could be done in this engine. Though the bug I found is that if you are in the middle of turning around when you have contact with an enemy, the game crashes after the battle :/ Maybe a good work around is to have traditional random encounters by simply walking?

I've tried a lot of fixes like the ones you suggested, but they either didn't help or made it worse ;.;

Well darn. I tried trowing my hat in to help.

I have a question not about Dys but about your creator page.

Who are the characters in this image? Are they in any games or other things you've made in the past?

They aren't anybody in particular.  They were fantasy races for a game that never got made, and now they're just there to look cool I guess

I'm a bit torn on this one.

The general aesthetics are reminiscent of a blend between the MOTHER series and Persona - which I both hold in high regards - but still have their own unique charm. That is something I really like about Dys.

The character sprites are pretty well done and make me want to learn more about the protagonists and their back stories...something that is sadly missing from Dys.

(One a side note: you should maybe clarify that the FurZerker artwork is explicit. I was rather...surprised, since no rating or description  mentioned that.)

The sounds are fitting for the lo-fi aesthetic. Some songs are pretty trippy and neat, like the aforementioned blend between MOTHER and Persona. Overall, I'm quite pleased with the soundtrack. Although some tunes, especially "DysBattle01"  are a bit repetitive, which is not surprising, given that it loops after about 35 seconds.

However, the gameplay is less compelling. Having a 3D dungeon crawler in a RPG Maker game is kinda impressive, but shows off the limitations of that engine. The controls are rather clumsy (strafing with Page Up/Down or Select/Start on a controller?)  but can still be mastered. Yet, navigating the levels gets rather tedious pretty soon, since EVERY wall, floor and ceiling tile of that particular level looks the same . I can see that it's supposed to be a maze and maybe the engine doesn't allow for more variety, but even the very first 3D FPS  games like Doom and Wolfenstein 3D had more diverse and easier to navigate levels.
I think an automatic minimap like in the Persona titles would be useful. I'm pretty sure there are VX ACE scripts available for that.
And although you mentioned it, having a game crash for no apparent reason is still rather annoying - probably another limitation of the engine.

Fighting also seems pretty random, since there are very few explanations for the different elements, classes, status effects and other things. Exploring and leveling also doesn't really feel like progress, more like doing the same thing again but with slightly different surroundings. The background zooms are also a bit monotonous, a bit more variety would be nice.

On a more technical note, 364 MB is a lot for a RPG Maker game with that scope. I went through the files and noticed a lot of RTP resources that are probably never used in the game (dragons, castles etc.). There are ways to release games without needing the RTP and I would recommend doing so.
On a related note, I noticed that many of the longer BGM is in .wav format. I would recommend converting them to .ogg files, for example with Audacity. That way, you could reduce the total file size by as much as 100 MB without significant reductions in quality. And the RPG Maker will still loop them without any problems (unlike e.g. MP3 files).

It was also a bit weird that the game folder is named "[vxa]fple_ace_1_5" and not "Dys" or something similar, but that's a minor issue.

Overall I really like what you're aiming for - the aesthetics and the setting have a lot of potential. I would love to see that idea completely worked out, but I don't think the current release is showing that yet.

If the 3D engine limitations are too severe, I would consider switching to 2D. I think a traditional but positively weird RPG game in the traditions of MOTHER would still find a lot of fans who wouldn't mind the lack of 3D gameplay, but would appreciate the lack of crashes.

Well, if it helps, this is definitely the last time I'm using this engine

Sorry if that comment came across as overly negative or discouraging. I'm looking forward to your next game! I'll also check out your other 2D entries. =)

Reply
The Gamer Cat4 years ago

game does crash. is it gonna be fixed?

Reply
Geg4 years ago
Very much enjoyed playing your game, thank you to the L.O.V.E. Games team - your artwork especially is fantastic!
Reply
L.O.V.E. games4 years ago(+1)

Thanks for playing!!  I enjoyed watching you give it a go!

Reply
The Gamer Cat4 years ago

i downloading game this desc of game reminds me of the center orb area in Code Lyoko and the movie Cube 2: Hypercube